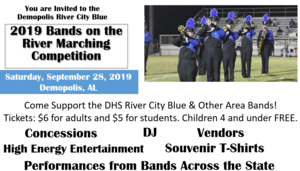 The Demopolis High School marching band is bringing back Bands on the River this year, and they are especially excited to introduce the community to a new face amid several additions to the competition. Set for September 28 and tentatively scheduled for 10am to 7pm, the event will showcase half-time shows from area high school marching bands including our own Demopolis River City Blue – now under the direction of Mr. Bryce Youmans.

Youmans is entering his first year as a band director at DHS. A native of Dallas, Ga., Youmans attended Paulding County High School, where he marched for four years in the band and was the low brass section leader for the 2011-2012 season. Youmans participated in several honor bands as a student in high school. He obtained his degree in music education on a full-tuition band scholarship from Jacksonville State University, in Jacksonville, Ala. While at Jacksonville State, he was a member of the JSU Marching Southerners, Hardcorps Pep Band, Chamber Winds, Brass Choir, and Trombone Ensemble. In his last year marching with the Southerners, he was the assistant section leader of the Southerners Trombone Line. Youmans did his student teaching under the legendary Mr. Inglis at Saks High School, where he assisted with all facets of the Saks band program. Prior to his student teaching, he assisted various marching bands in the east Alabama and west Georgia area as a brass instructor.

Youmans is happily anticipating his first major event at DHS and hosting the competing band students. “I want to give a warm welcome to the bands participating in Bands on the River this year,” he said. “We are excited to have you all in our town next month. I would like to encourage members of our community to come out and see the competitive side of marching band. We look forward to performing our show to our audience this year.”

Concessions will be open for the entire day, and souvenir T-shirts and programs will be available for sale. Family and friends will also be able to purchase shout outs, which will be announced over the PA system during the day. Besides new leadership, this year’s band festival has a couple of other added features – a DJ and a vendors’ alley where event attendees can purchase festival food, souvenirs and other goodies.

Youmans offers a heartfelt, “Go Tigers and River City Blue!” – and the RCB students, staff and supporters look forward to the 2019-2020 season with their new director. Community members are encouraged to come and enjoy some high energy entertainment and support their local school as well as other area students at the same time! Tickets are $6 for adults and $5 for students. Children 4 years old and under are admitted free. Interested Director of Bands should visit http://bit.ly/BOTR2019 to register for the 2019 BOTR Marching Competition.